Anatoly Blinkov with a group of other liquidators

The interviews were conducted with the following liquidators: Anatoly Myshjakov, Russian (interview prepared by Ksenia Srednyak); Elvijs (this liquidator prefers to stay anonymous, so it isn’t his real name), Latvia (interview prepared by Dita Betere); Vsevolod Smerechynskyi, Ukraine (Ivan Kendzor); Blinkov Anatoly, Russian (Julia Seeleva) and Chernenky Sergey, Russian (Nadya Sporysheva).  All respondents gladly agreed for the interviews, which were conducted in a pleasant atmosphere. It was nice to see, that among those liquidators there are also representatives from different organizations, dedicated to the Chernobyl tragedy.  Vsevolod Smerechynskyi is the head of Lviv branch of the organization “Chernobyl Union of Ukraine” and Blinkov Anatoly – is a director of the Tomsk branch of the “Conjunction of Chernobyl”

The attitude towards the use of nuclear energy, before the accident happened, among the respondents was different. Some of them considered that nuclear energy is “the future of mankind” – Anatoly Myshjakov. “It is better than thermal or other alternative kind of energy due to next reasons: a nuclear power plants produces more energy than a thermal or wind power station and nuclear power stations are ecologically cleaner compared to thermal electric power stations” – Vsevolod Smerechynskyi, some were against it, like Elvijs, who contended: “What’s the point? They are going to build these power stations anyway. Thank’s God they are not building the power stations in Latvia!” But before the accident happened nobody didn’t even imagined, that their own life would be somehow connected with the liquidation of the consequences of the nuclear tragedy.

The 26th of April was usual day for everyone. They got the first news about the accident  mainly from the short newspapers articles and TV news, however the military unit, in which Chernenky Sergey served at that time, has gotten the first message at 3 a.m. April 26 and in 28th of April he was already in Pripyat. I would like to add, that the dates when liquidators got in the Chernobyl area are different. Vsevolod Smerechynskyi arrived in the Chernobyl zone in 9th of May 1986; Blinkov Anatoly and Anatoly Myshjakov came in 1987 (they didn’t work in the one place) and Elvijs came to Chernobyl in 1988. This proves again how long liquidators fought against the radiation and how big was the scale  of the Chernobyl accident.

The task of each liquidator in the Chernobyl zone was absolutely different – Chernenky Sergey was responsible for catching looters, who were quite numerous. Such people wanted to make money selling contaminated goods in the marketplace in Kiev. Sergey remembers that two people once tried to steal a car which was contaminated. They were able to drive just a little bit before dying. The level of radiation was 6000 roentgen. The task of the group, where was Vsevolod Smerechynskyi was to wash radiation from the surface of buildings and roads. His task was also to measure the level of radiation and he says that the average level was 100 milliroentgen per hour, which is 10,000 times higher than a normal one. Blinkov Anatoly was there as a chemist-scout. He was one of those who first came on a new site of the polluted territory and carried out gaugings. Then the soldiers who cleared territory came. The task of Anatoly Myshjakov and his group was to repair or substitute special spherical cranes in the third power unit, which had been damaged during the accident. Nobody did it before that is why they started with the working up of technology. “The most terrible thing, – says Anatoly, – was of course radiation. You don’t feel it, you don’t see it, you don’t hear it but you understand that it is everywhere…” Elvijs, being a driver was responsible for taking people from one place to another. His bus, as he says, was full with radiation – when he wanted to repair it and put his had under the bus, his head started to pulse and hurt and he felt dizziness, but still, he continued to drive with it because there wasn’t another one and they needed a bus. 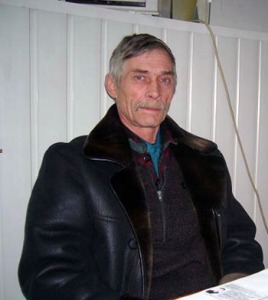 I would like to point out that during the interviews all participants asked the liquidators if they had a chance to reject of it. The best answer to this question would be a quote of Anatoly Myshjakov, who said  “I think there are not free-will persons for trips like this”.

Mainly the accommodation, food and protective clothes were not appropriate for such kind of works.  Vsevolod remembers: “Every week we received masks, which became orange after several hours of use” . However, Anatoly Myshjakov said that “the food was very various and lavish: much meat, fruit and vegetables, sweets, different sorts of fizzy water (even Coke)”. Despite the fact that it was springtime and there were a lot of berries and vegetables, it was forbidden to consume them because of the radiation. It was also forbidden to drink alcohol.

After returning home everyone felt the first negative influences of the radiation.  Vsevolod Smerechynskyi said “When I came back home – I was staying two months at home – I was unable to do anything, I was weak and giddy” . Later, he became disabled of the third group. Chernenky Sergey is also a disabled person – his brain is affected. He cannot sunbathe because his skin becomes covered with ulcers. Elvijs has serious helth problems with bones and stomack. He wasn’t able to have children anymore after Chernobyl.  As the reward of this work Elvijs got the benefit 120 rubles  that rised up to 60 Lats during the years. He also received discounts  –  paid half price of public facilities and public transport but in the 90s this support ended. In return Chernenky Sergey is getting a pension about 1000 euro per month. But I believe this is very rare case.

Each liquidator considers that it is very important to remember the Chernobyl accident t nowadays. Anatoly says: “Today it would be very important to tell to children, students and adults about Chernobyl, about danger of atomic energy”. Anatoly Myshjakov thinks that the accident shows how responsible is the work at the nuclear power stations. It is work only for specialists because the price for mistakes is too high. I asked Vsevolod if he often recalls those days, and he answered that he often remembers about the liquidators, who turn to the organization “Chernobyl Union of Ukraine” daily to solve their own problems. Elvijs  says: “If it wasn’t me, someone else should have done it.” He feels sorry for his lost health but at the same time he is happy that he’s still alive, because a lot of his friends who also were liquidators are dead now.

Different people, different destinies, who were united by the common desire to survive and to tell their stories to us. Chernobyl has changed the life of every liquidator. The price, which they had to pay in order to overcome the consequences of the Chernobyl accident, was too high. But they managed to do it, they did it for our future, and our duty is to remember them and to commemorate this date not only in the 26th of April, but everyday.

This entry was posted on Tuesday, March 1st, 2011 at 12:37 pm and posted in Interviews, Liquidators. You can follow any responses to this entry through the RSS 2.0 feed.
« “Radioactive clouds do not stop at the Iron Curtain”
“Criticism doesn’t change anything, new inventions and initiatives could” »